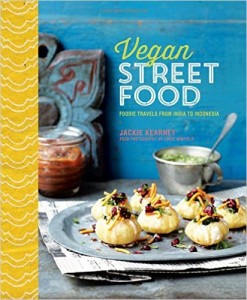 On the bookshelf right now is Vegan Street Food: A Culinary Journey Through Southeast Asia

Kearney is a vegetarian cook who competed and made it to the finals on the UK version of Master Chef in 2011. She then created a food truck named Barbarella and toured the British Isles, sharing her love of vegetarian and vegan food with those who wanted to eat it. She also runs a vegetarian supper club out of her home.

This books highlights recipes she found during an extended trip to India and Southeast Asia, including stories from her food adventures overseas.

In the book she says “I never wanted my food to be labeled as vegetarian or vegan. It’s a personal choice that I eat this kind of food.”

This goes along with our philosophy about food: it should taste good, be stacked with flavor, and be loaded with plant foods. Enjoy this read.

Street food seems to be universal. Every country has its own version. There are some cool videos online that highlight street food from around the world.

Here’s one such video from the YouTube channel Gluttony – Best Streetfood.

Gluttony has a series of videos that show street vendors making a variety of Indian food. This video shows how they make Punjabi Aloo Chaat, a popular street food.

NOTE: Some of the videos on this channel do contain milk and paneer. Vegans can easily substitute soy milk and cashew cheese in those recipes.